Behind the "Rebirth" of the Empress and Empress's Buddha Figure: Real People's Interpretation, Revitalizing Cultural Relic

In the Binyang Middle Cave of the Longmen Grottoes in Luoyang, Henan, the relief sculpture of the "Emperor and Empress's Ritual to Buddha" was originally engraved with the stone carving art treasure of the Northern Wei Dynasty. In the 1930s, this group of national treasures was robbery and vandalized and scattered overseas. Recently, a documentary titled "Rebirth" of the Empress and Empress's Reverence to Buddha was broadcast on CCTV.

Two years ago, the Longmen Grottoes Research Institute cooperated with domestic and foreign scholars to use modern digital technology to collect data, restore virtual and display the "Emperor and Empress's Ritual Buddha" that has been scattered in many places. Circle", in another way to reunite the "Emperor and Empress", and truly make the cultural relics come alive again. 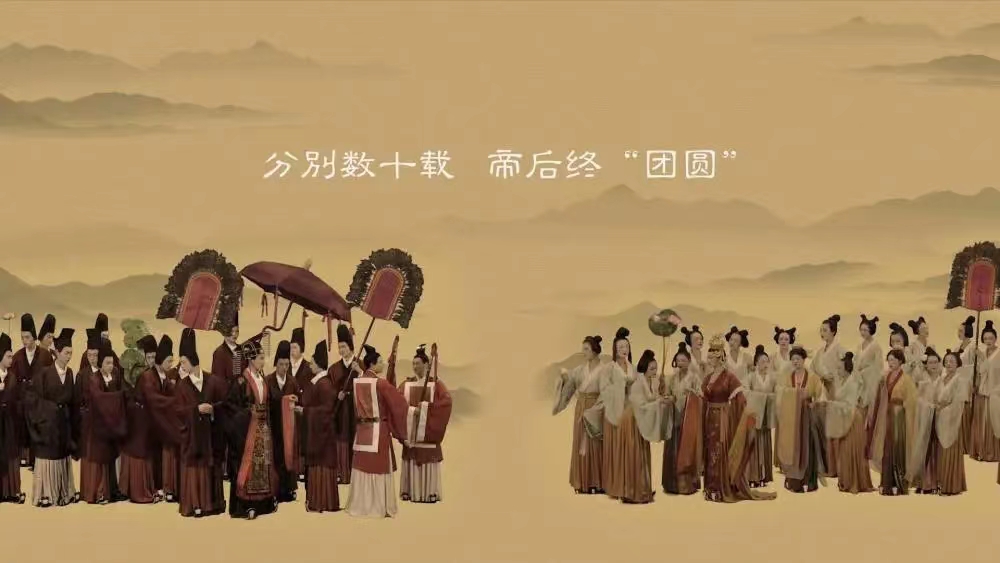 A real person interprets the "reunion" of the empress

The emperor and the queen are separated, the treasures are broken

Binyang means "to meet the rising sun". The entire Binyang Three Caves sit west to the east, and the stone quality is stable and excellent, which is suitable for carving. Therefore, it became one of the large Buddhist caves built by the royal family after the Northern Wei Dynasty moved the capital to Luoyang. The book of Wei records: "In the early Ming Dynasty, Emperor Shizong (Xuanwu Emperor Yuanke) ordered Chang Qiuqing Bai to rectify the grottoes of Lingyan Temple in Beijing, located in Yique Mountain, Luonan, as two grottoes camped by Emperor Gaozu and Empress Dowager Wenzhao. Yongping In the middle, Zhongyin Liu Teng rebuilt one of the grottoes for King Sejong, and there were three of them. From the first year of Jingming to the fourth year of Zhengguang four years ago, 802,366 worked hard." This is one of the few caves in the official history of our country. The exact record of the grottoes took 24 years and more than 800,000 years of work. Due to the palace coup in the late Northern Wei Dynasty and the death of the host Liu Teng, only one of the planned three caves was completed. Sui and Tang Dynasties were able to continue chiseling.

The "Emperor and Empress's Ritual to Buddha" is 205 cm high. The northern section is engraved with Emperor Xiaowen wearing a mian, wearing a tunic, holding an incense burner, and the civil and military officials with wide robes and wide sleeves hanging over the collar, and holding umbrellas, feathers, and long swords , Surrounded by the waiters of the incense box, the scene is slowly marching. The composition of the southern section is similar to that of the northern section. Empress Wenzhao is engraved with a lotus crown, and she holds incense in one hand, followed by two palace concubines wearing lotus crowns.

The outline of the whole relief is smooth and the craftsmanship is superb, and there are more than 40 figures carved in the whole picture. The layers of characters are densely overlapped, but the primary and secondary are distinct, and they appear to be scattered. The characters have different moods and care for each other, and the details are rich. The figure is tall and elegant, slightly leaning forward, which not only retains the nobility and dignity of the demeanor and majesty of the emperor, but also has a religious connotation of floating like a fairy. At the same time, the palace maids are smiling and walking forward, forming a subtle contrast with the whole pious and solemn atmosphere, making the picture more lively and lovely.

In addition, judging from the ceremonial systems of the characters' clothing and hair styles, umbrella covers, and feathers, Emperor Xiaowen's policy of promoting sinicization has achieved remarkable results. After Emperor Xiaowen moved the capital to Luoyang, he tried his best to implement the policy of sinicization, changed the custom of Xianbei to Huafeng, and established himself as the historical position of the inheritor of Chinese civilization. In order to change the image of the Northern Wei regime as a foreign military power, he ordered to change to the Han system in terms of clothing, language, surnames and etiquette, as well as official ranks, laws and education systems. The national unity of the DPRK has laid the foundation for integration. Due to this series of reforms, coupled with the influence of ancient artistic traditions in Luoyang, the Buddhist art of the Northern Wei Dynasty also experienced drastic changes after 494. The Southern Dynasty art centered on Nanjing played a key factor in the development of Buddhist stone carving art during the Six Dynasties. The image of Emperor Xiaowen in the "Emperor and Empress's Rites to Buddha" has a typical southern style, which is very consistent with the national policy of vigorously promoting the integration of northern and southern cultures. The two earliest relief sculptures with thematic scene compositions are national treasures in the history of Chinese art and sculpture.

Sadly, the modern Longmen Grottoes suffered an unprecedented catastrophe. The exquisite statues in the grottoes were stolen and smuggled abroad, and scattered in museums and art galleries in Europe, America, Japan and other countries. Today, "Emperor Wei Xiaowen's Respect to Buddha" is in the Metropolitan Museum of Art, New York, USA, and "Empress Wenzhao's Respect to Buddha" is in the Nelson Atkins Museum of Art in the United States. 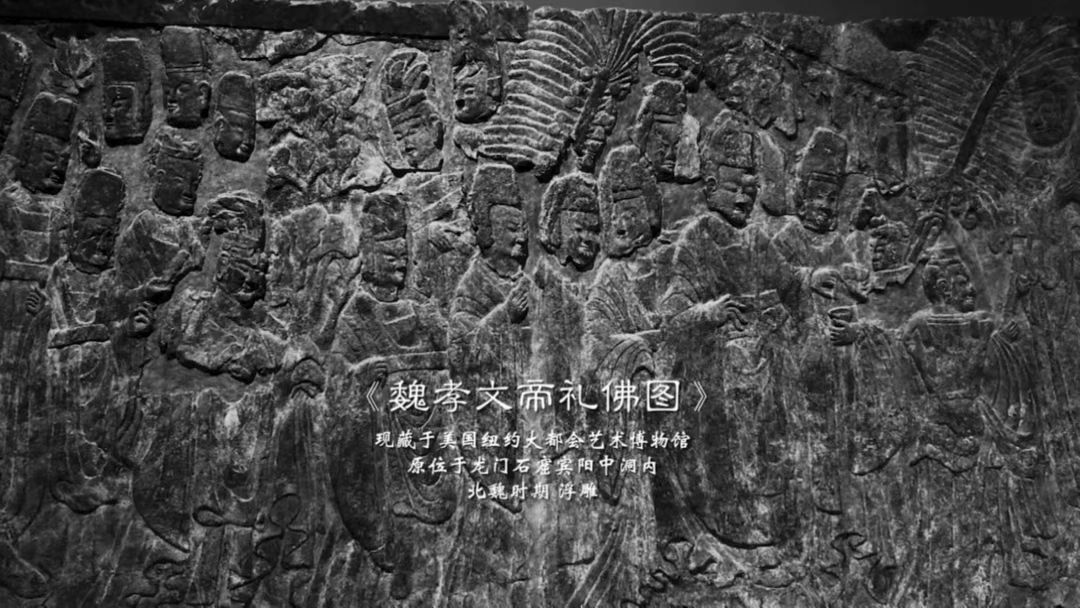 One of the relief sculptures of the "Emperor and Empress's Reverence to the Buddha" is one of the stone carving art treasures of the Northern Wei Dynasty, "The Emperor Wei Xiaowen's Respect to the Buddha". Video screenshot. 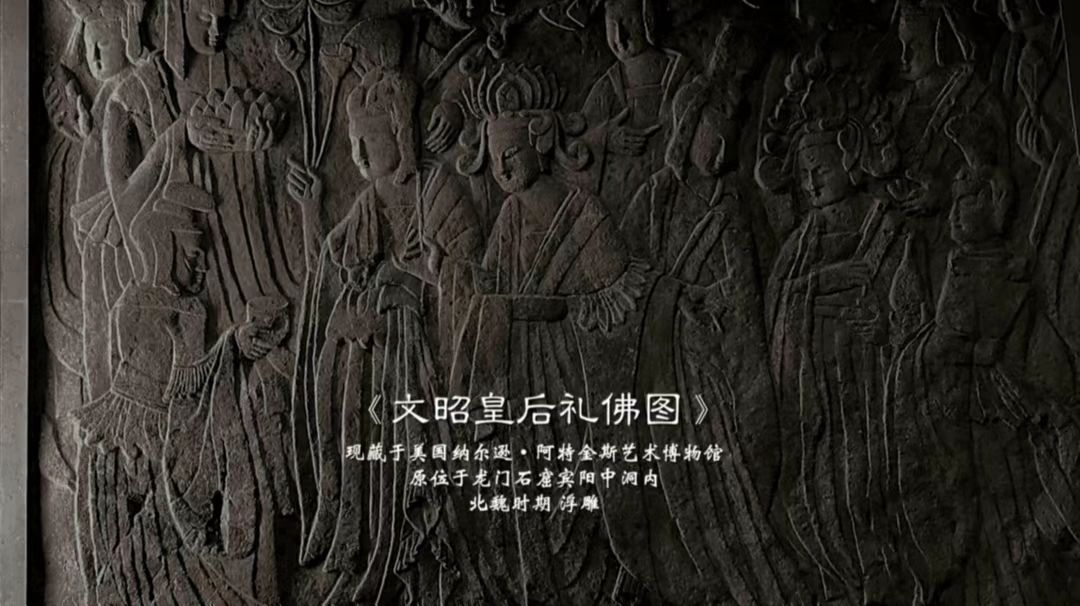 Due to the scattered fragments of the chiseled reliefs, the reliefs of the "Emperor and Empress's Ritual to Buddha" displayed in the above two American museums are also incomplete and damaged, which is quite different from the original. In recent years, in order to fully present the national treasures again, the Longmen Grottoes Research Institute, the Plastic Arts Center of Xi'an Jiaotong University and the East Asian Art Center of the University of Chicago have jointly launched the "Virtual Restoration and Display Project of Buddha Figures of Emperors and Empresses in Binyang Zhongdong of Longmen Grottoes". Started to do the three-dimensional data collection and entity restoration of discrete modeling at home and abroad for Buddha images of emperors and queens.

According to Shi Jiazhen, director of the Longmen Grottoes Research Institute, the project has made initial progress in the joint efforts of the three parties: the data of the Nelson Museum in the United States, the Longmen Grottoes Research Institute, and the original site of Binyang Middle Cave have all been scanned and processed. The established technical path is to use computer virtual splicing and 1:1 3D printing solid splicing of fragments to correct each other's errors, and reverse the modeling restoration of the entire relief. It is expected that there will be a complete presentation in the near future.

While we are waiting for digital technology to reproduce history, the former grand scene may be reproduced in another way. Cultural revival, clothing first. In recent years, various Chinese traditional costume revival teams have successively launched their own high-quality and exquisite clothing restoration projects. 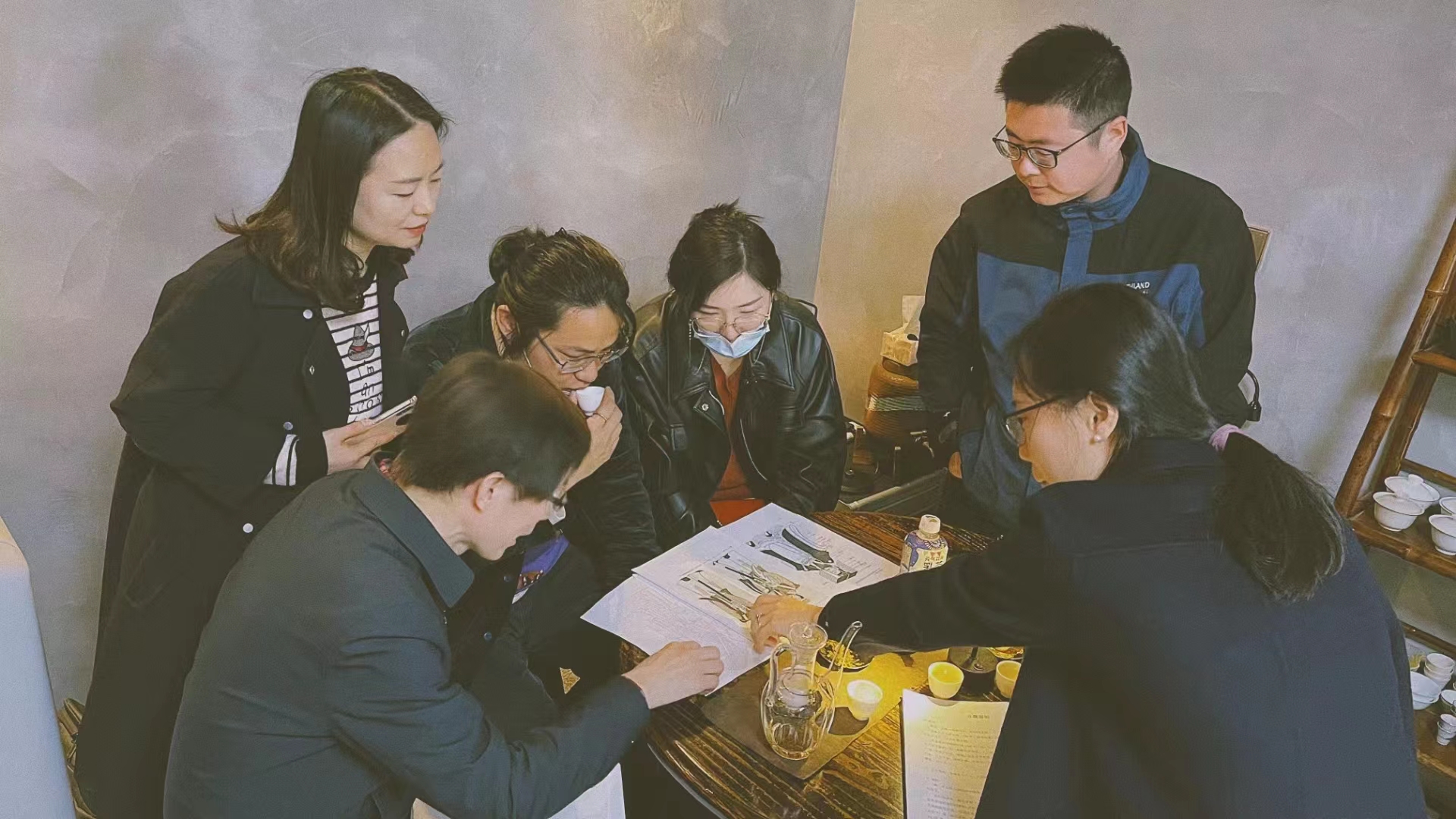 In 2021, jointly produced by the Propaganda Department of the Luoyang Municipal Party Committee and Xinhua News Agency, the Longmen Grottoes Research Institute proposed academic guidance, and the live-action version of the "Emperor and Empress Ritual Buddha" planned and produced by the "In Luoyang" video team will be presented to the world. The actors have wide robes and long sleeves. , walking slowly in the wind, the restoration of elegant costumes and the vivid interpretation of scenes have made countless people dream of going back to the millennium and have a glimpse of the cultural splendor of the Northern Wei Dynasty. After crossing the long river, the emperor and the queen finally have to "meet". 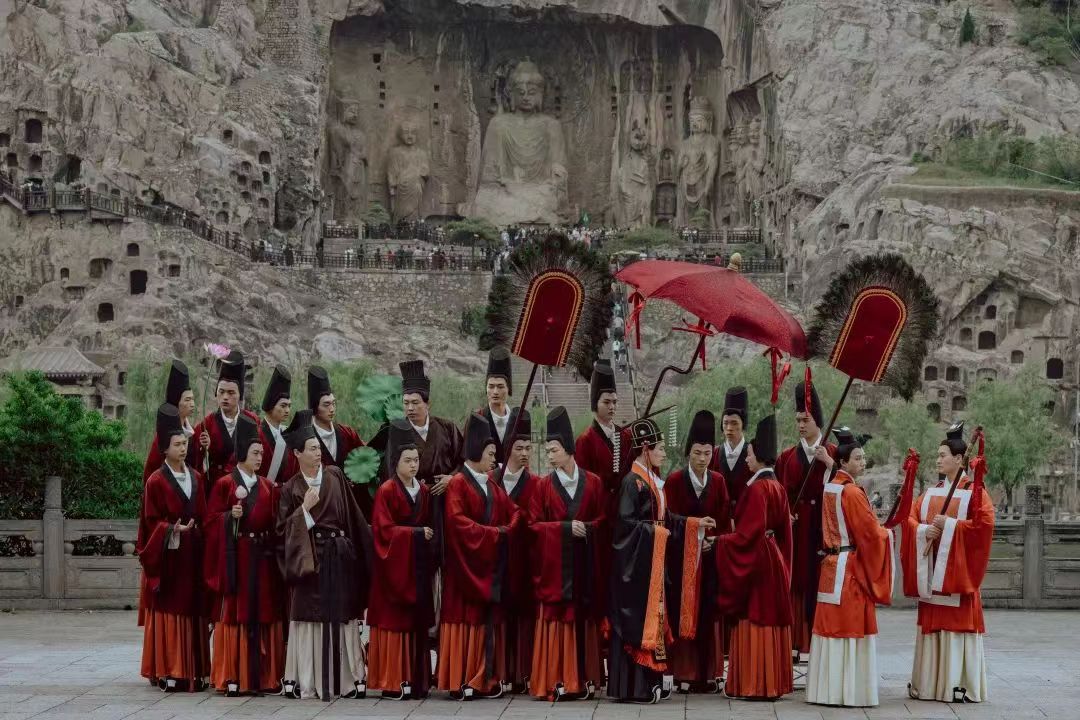 Due to the lack of historical data on the clothing system in the Northern Wei Dynasty, the restoration of the clothing was not easy. Dove, the project director of the video producer's "In Luoyang", introduced to The Paper: "In the Hanfu design circle, people rarely do Wei and Jin costumes, because the historical data is unclear and it is easy to cause controversy. And the costumes on the reliefs are also relatively vague. , again with no prototype records. We were rejected by many costume restoration teams early in the project.”

From the relief statue, Emperor Xiaowen wears a crown, a wide-sleeved blouse with a front, a square collar robe, a waist belt, a large belt, a knee-covered sash, a pilgrim skirt, a wat head and shoes, etc. It should belong to the Mianfu system; the queens and concubines wear lotus-shaped crowns, wide-sleeved shorts, and inner clothes. The sleeves hang above the elbows with many leaf-shaped decorations. Long skirts, wat head and shoes, this is the only image of the clothes worn by emperors and empresses in the Northern Wei Dynasty so far. 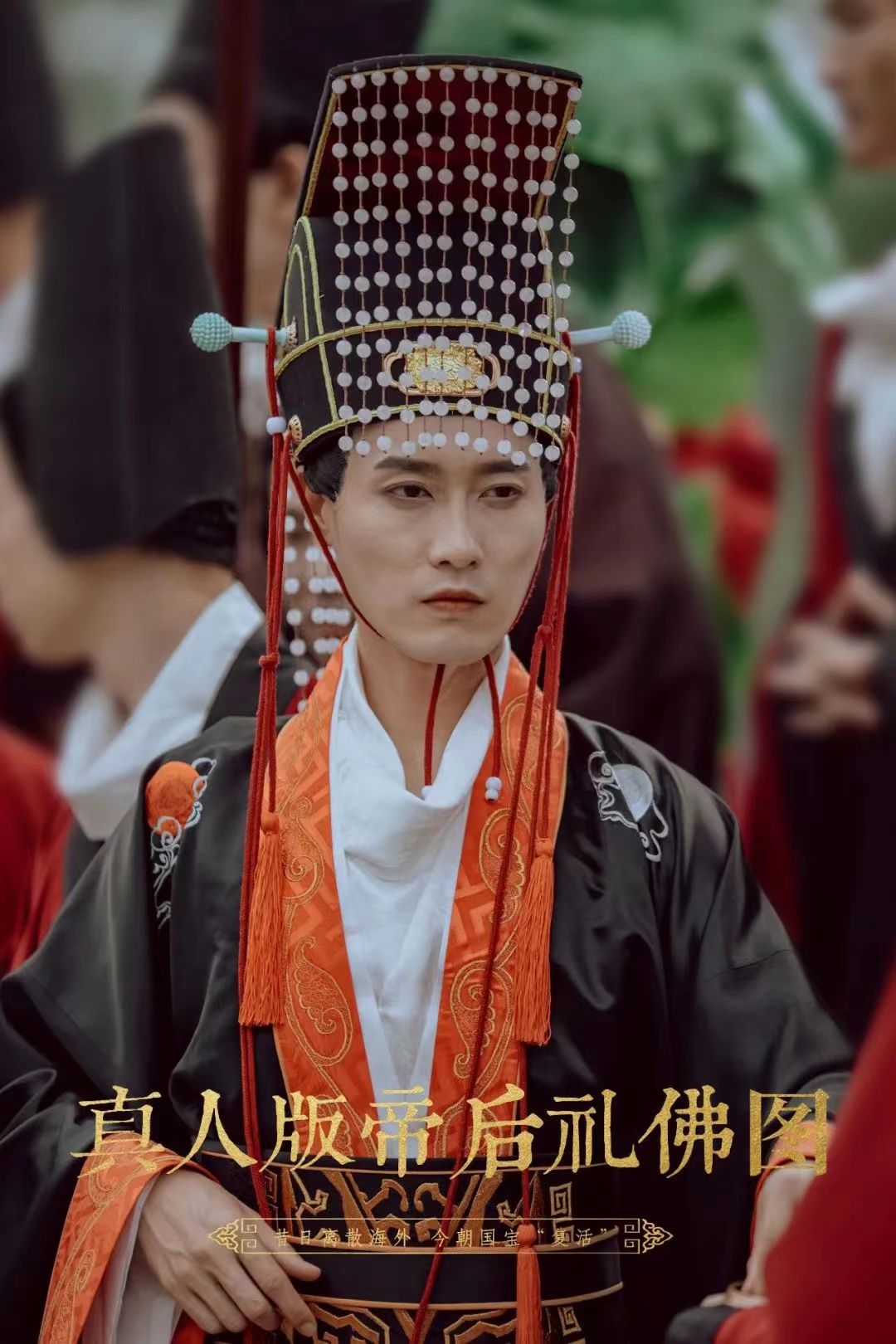 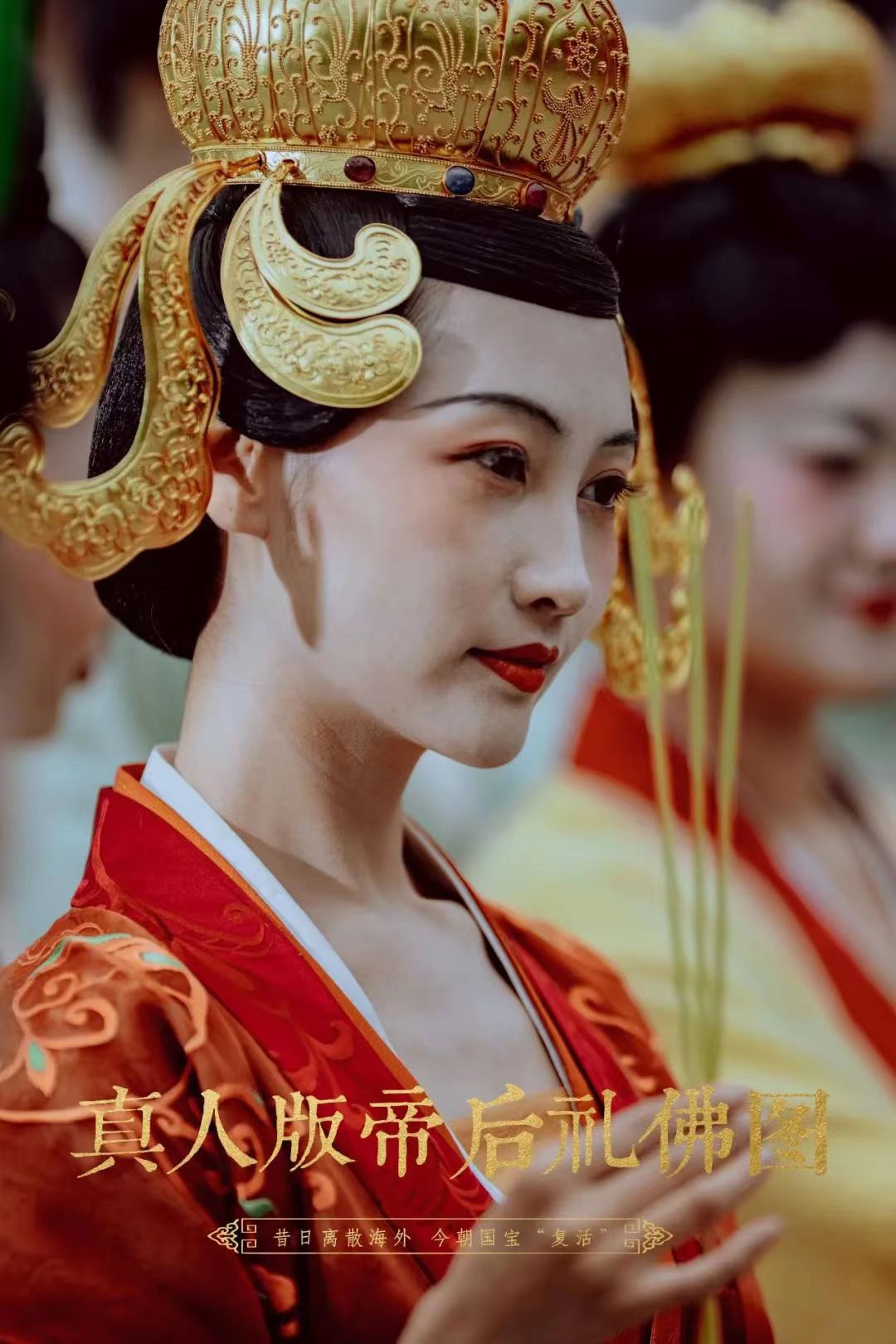 The "In Luoyang" team finally found Li Yan, the person in charge of "Zewan Original Design". The costumes of the Northern Wei Dynasty started from the Qin and Han Dynasties, and then from the Sui and Tang Dynasties. In addition, during the Wei, Jin, Southern and Northern Dynasties, Lao Zhuang, Buddhism and Taoism became fashionable, and the clothes tended to be elegant and elegant. Taken together, there is a style presented by the video.

Dove emphasized to The Paper that the video decided not to use the words "restored costumes", but emphasized "real people's interpretation", "For rigorous considerations, we can't say that we have 'restored' the royal costumes of the Northern Wei Dynasty, and 'real people's interpretation'. It’s a compromise. I hope everyone will pay more attention to the cultural relics themselves and not pay too much attention to the restoration of the details of the costumes, so as not to cause controversy.”

In order to fit the image of historical figures, the project team also put a lot of effort into the selection of actors. "The male actor is tall and straight, and his expression is quite majestic. He is 31 years old, which is just in line with the age of Emperor Xiaowen; the queen is dignified and atmospheric, and the maids are smart and cute." 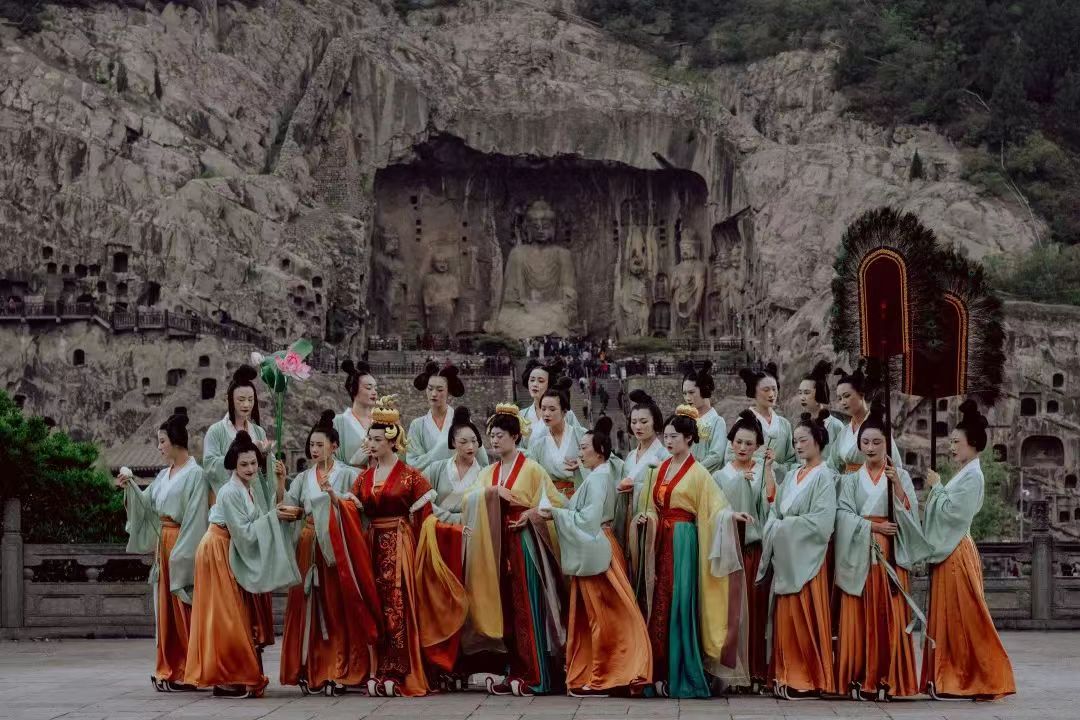 The relief has only one static picture, and this time the video has made a dynamic effect. Pigeon introduced that the range of motion was designed before shooting. "Emperor Xiaowen seems to be picking incense ashes on the relief, while the queen turned 45 degrees to the side and inserted several long thin incense sticks into the incense burner. All the movements started back 2 seconds before the freeze frame, which not only achieved a vivid expression, but the final frame was consistent with the relief. "Modern technology strongly supports the restoration of cultural relics, and artistic creation can find the beauty of charm. "This kind of encounter across thousands of years, I believe, will touch every Chinese." Pigeon said.